Nōema Stories
Homegrown wisdom
Nōema Stories shed light on the landscapes, people, ideas and traditions that inspire the Nōema philosophy. To mark the beginning of the series, Athinagoras Kostakos — culinary director of Nōema — opens up about ingredients, terroir, and his passion for foraging. 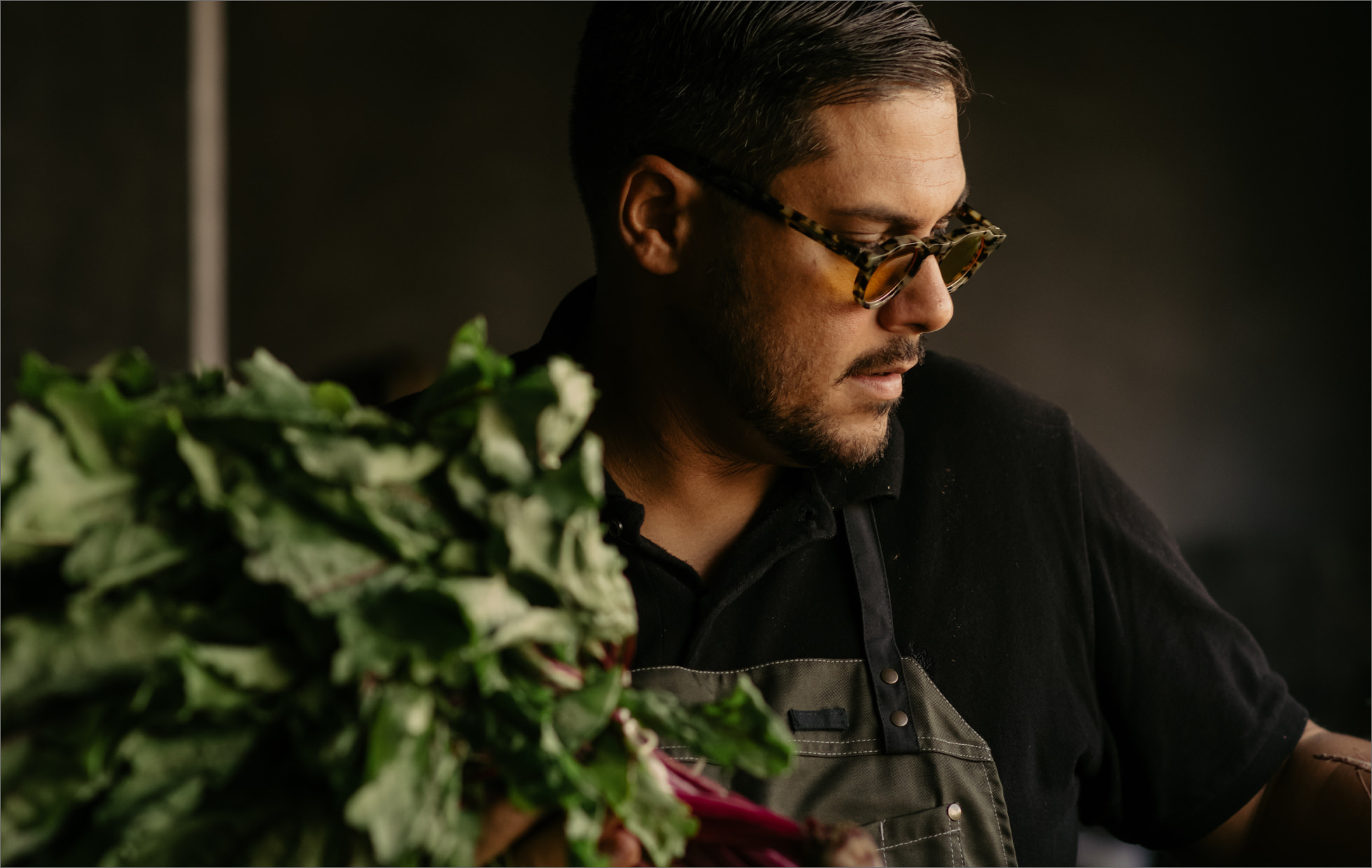 What's your favorite time of the year for food?
I would say spring because that’s when we have some of the most interesting vegetables and herbs in the Cyclades — and the best lamb and fish as well. Everything is in bloom, and in the summer, the water gets warmer and more crowded with tourist activities so many fish go to hide in deeper, cooler, quieter waters. We also preserve a lot of ingredients in the spring to use throughout the season, which allows me to play around with flavours and applications.

Does this also depend on where in the world you are living and working?
Immensely. I worked in London for a while, and there you can get any ingredient you need at any time of the year pretty much, but the relationship between the kitchen and the land is very different in these big metropolises. At Nōema, the majority of the ingredients come from the Cyclades and surrounding islands. Mykonos is quite a popular tourist destination and therefore real estate is expensive and the soil isn’t so plentiful, so we source a lot from Crete, which is Greece’s biggest island. All the cheese, yoghurt, and dairy products come from a trusted supplier here on Mykonos. We get lovely tomatoes from Crete and Santorini; and lots of vegetables, greens, and fruits from the neighboring island of Tinos.

"I would spend my days wandering Greece, foraging for anything I can find and experiment with"

What couldn’t you cope without in the Nōema kitchen?
I would say that the most important ingredients in this kitchen are the fresh vegetables and fish. It’s also really important to have the best quality olive oil possible. Without these things, I would be lost! Oh, and garum, of course.
‍
Can you tell us your garum recipe?
Our garum recipe is a secret in our kitchen and the key player in the umami taste in our dishes. We started making it a year before opening Nōema because you have to give it time to work its magic. As per tradition, we use the blood and heads and off-cuts of all the fish that go through the kitchen — lots of sardines, as well as salt and water — and let it all ferment in a big barrel for at least six months. We also pasteurize it.

We use this garum to give an extra boost of taste to all our dishes. We have to keep it in a separate room away from any houses because — and this is something that anyone who has witnessed the garum-making process will agree with — the smell is really, really, intensely bad! It’s hard to understand how such a stinking thing can produce such a beautiful and tasty juice. It’s difficult to explain how bad it smells but the end result is just so fantastic. It’s also a testament to human curiosity… think of the ancient Greek experimentalist who threw all these fishy, bloody off-cuts together, left it for months and months, looked past the terrible smell, and found something beautiful at the end of it. 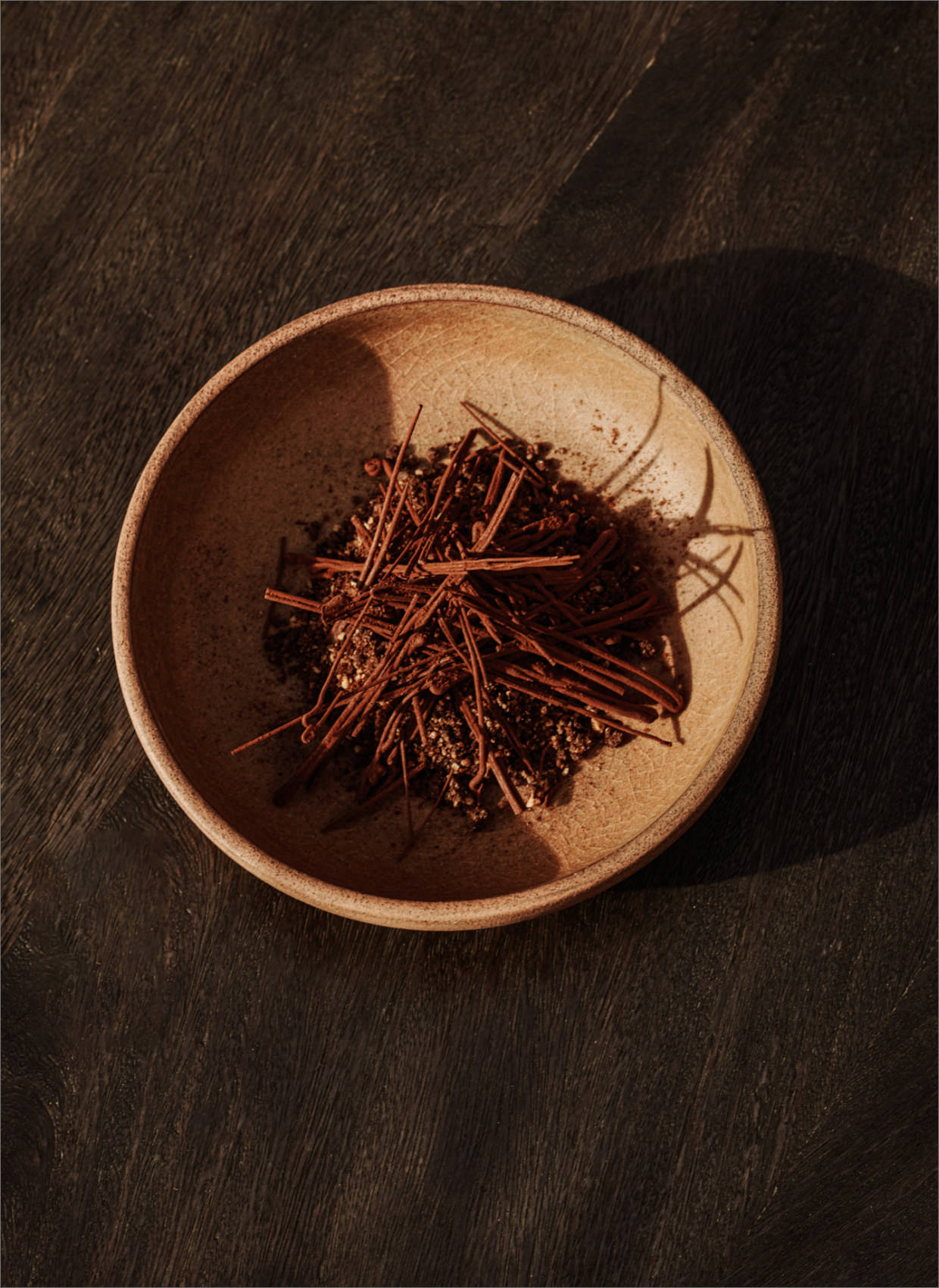 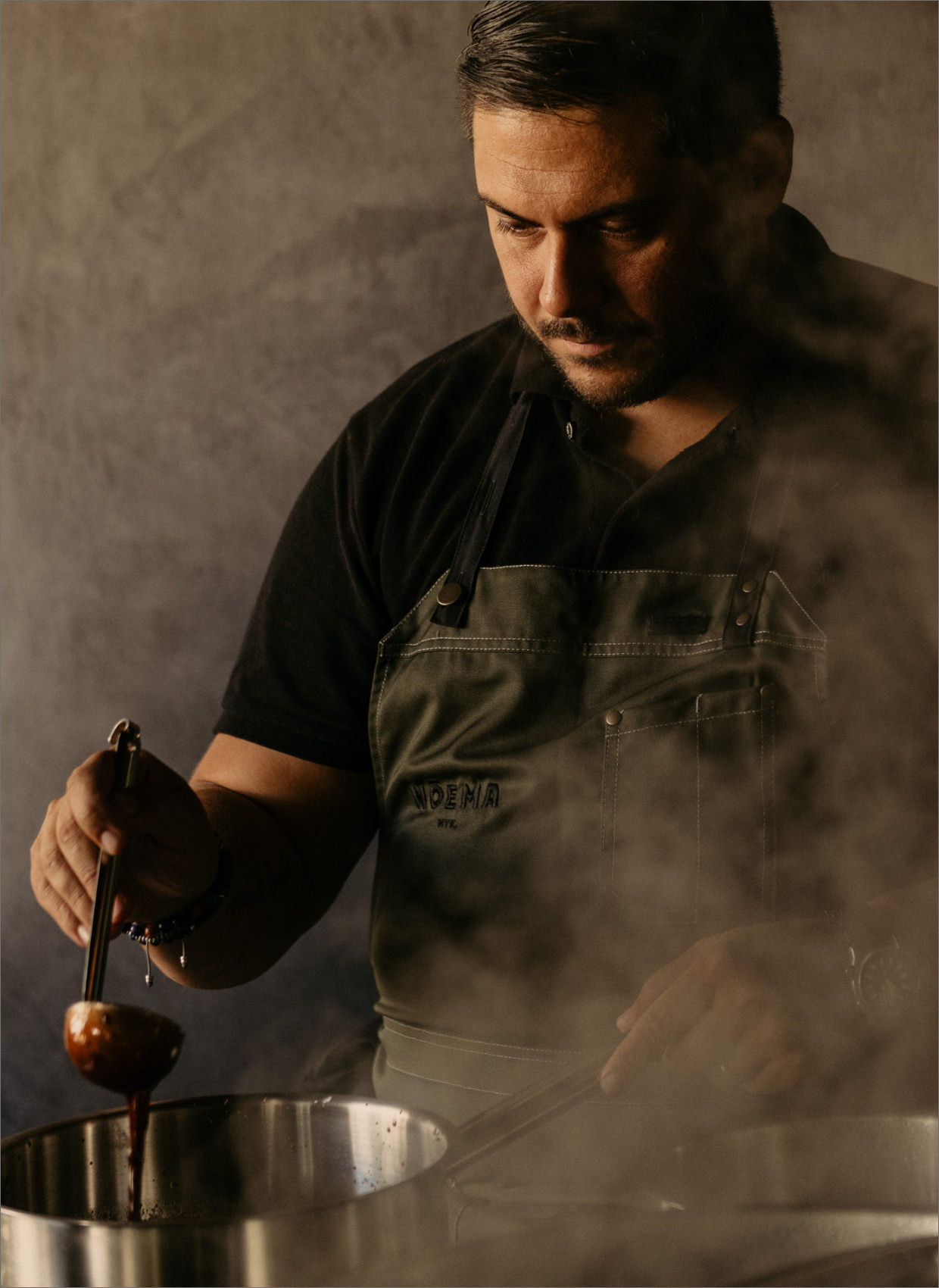 Which ingredient do you think Greece is most proud of?
That’s something I can easily answer because, to be honest with you, there is no competition when it comes to Greek yogurt. “Greek” is the word that springs to mind all over the world when the question of good yoghurt comes up. I also strongly believe that Greece has some of the best tomatoes in the world.

Do you think tradition is important?
Yes and no. I think traditions should be respected but also balanced out by creativity. Personally, I need to write my own story. We follow many traditional Cycladic cooking techniques and preserve many ingredients in a traditional way, but I also try to improve on things and make my own mark. 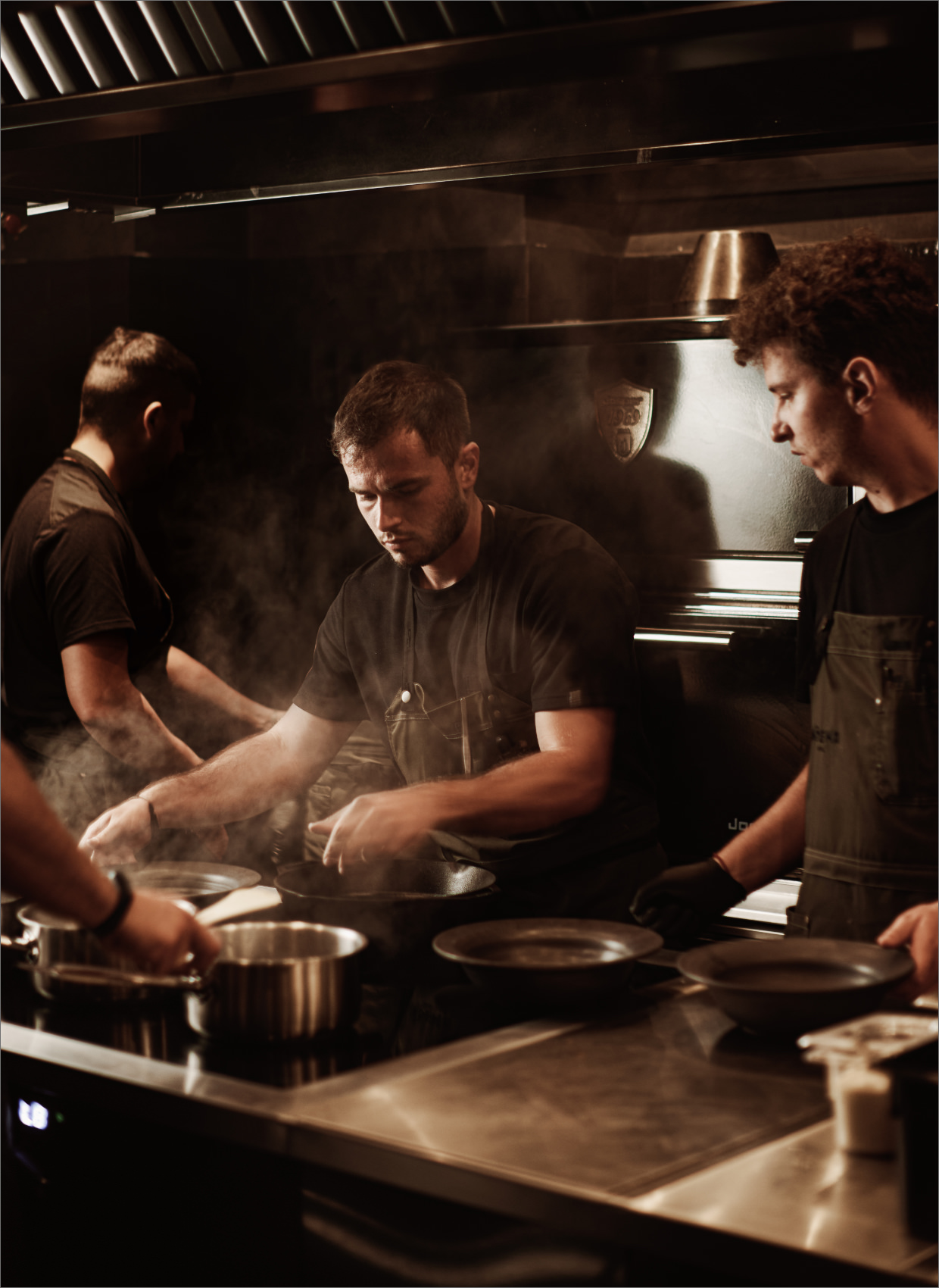 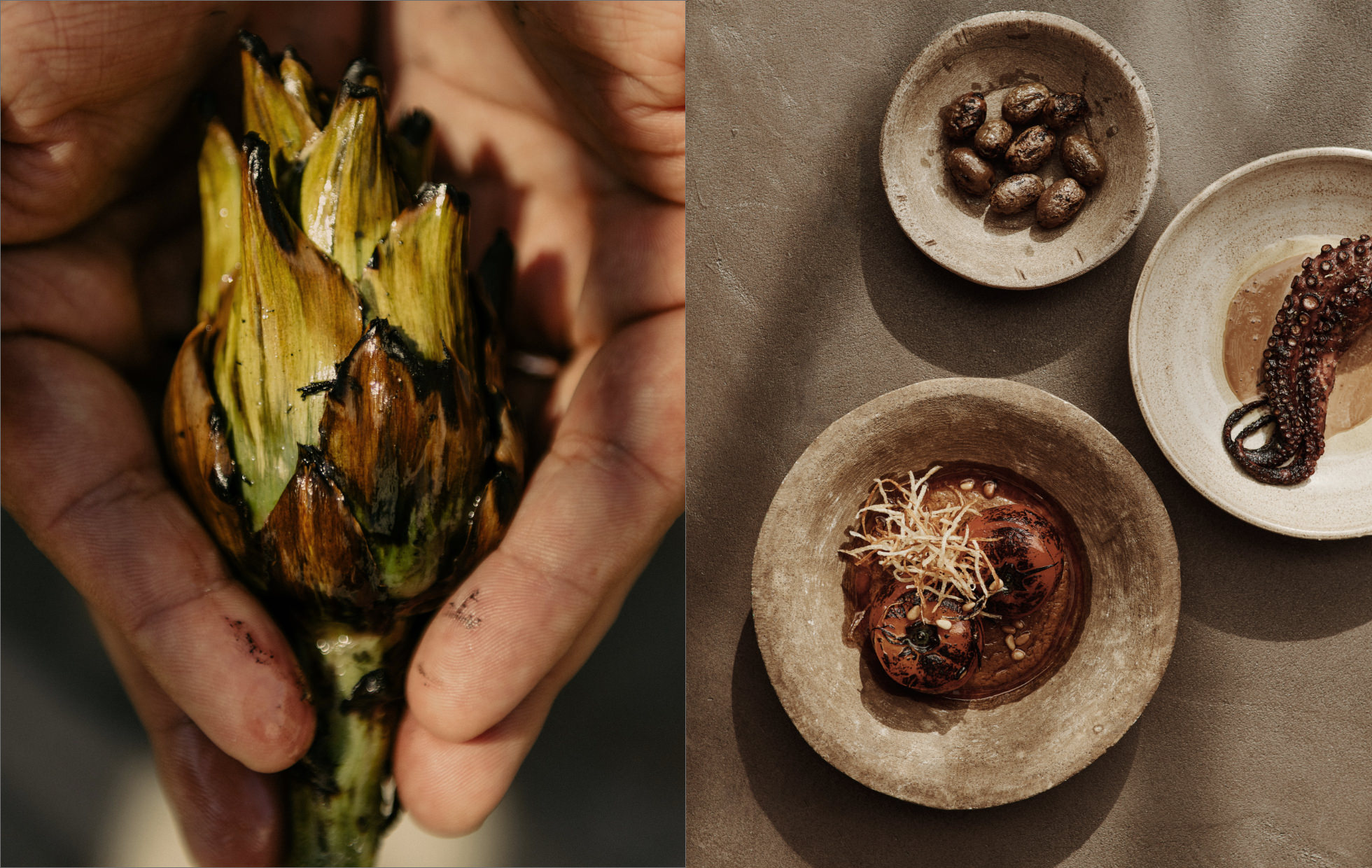 What would you be doing if you weren’t a chef?
I would just forage. I would spend my days wandering Greece, foraging for anything I can find and experiment with. I love to do that with my family as well. My kids are quite young so normally I do it myself or with my wife. Depending on the season, we look for mushrooms, fruits, herbs… it's not just a hobby but another way of living. One time on the mainland we found so much wild oregano — the flavour was so amazing! — that we ended up dehydrating a lot of it and using it for two entire seasons. I must say that here in the Cyclades, I am connected to the ingredients in a very profound way.

What exactly is your connection with Mykonos?
I've been on this island since the mid-2000s but I’ve worked all over the world in the culinary industry. I came to Mykonos as a tourist and opened my first restaurant around 2010. I ran that restaurant for 10 years and picked up a few awards in the meantime. I feel like a Mykonian now, and I feel like I understand the clientele. The suppliers and farmers are my friends — and we fight like friends, too! We also play on the global level and have some pretty special clients, so that’s a good challenge. I’m truly happy here on Mykonos.

How does one start with Cycladic cuisine?
If you’re a beginner in Cycladic cooking, I would recommend starting out by making a simple grilled fish. This is a typical, easy Cycladic meal. You just need very good quality fish and very good quality Greek olive oil, lemon, fennel, parsley leaves, and rock salt — and as simple as that, you can make your first Cycladic dish. Another fun dish for me personally is the sea urchin with spaghetti. Try it!

Nōema is opening for the season on May 6.